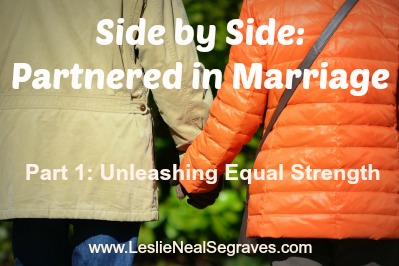 We said “I do” and lived happily ever after. Well, not really…

“I cried much of our first year of marriage believing I had made a mistake.” – Leslie

“Usually I had the reputation of building people up. But with my wife, I felt that I was the reason for so much frustration and tears.” – Chad

So what caused us such frustration, discouragement, and great angst in our first year of marriage? Theology.

Yes, theology. For years as single people, we both felt that God could use us. We felt free to pursue God, to know him and to respond to him. For years, God had led us both to take initiative, to lead, to speak publically, and to use our gifts.

Then, marriage came and confusion hit. People at seminary thought I (Leslie) would stop simply because I was now married. People insinuated that only Chad should get direction from God for our family. How was this supposed to work when God gave me a mind and heart for vision, future thinking, and entrepreneurship?

Why when single did we both have the ability to lead in projects and then married, everything was supposed to change for me? I was to simply help Chad. It made absolutely no sense. And it made me think deeply. Had I made a mistake? Did God have more access to me single than he did married?

Our discouragement and confusion led us to search Scripture deeply. We went to God and told him that as we studied, we would surrender to whatever he showed us. God quietly encouraged our hearts with John 8:32, “You will know the truth and the truth will set you free.” We realized that either way, God would provide freedom – either freedom to accept that leadership is one-sided in marriage, or freedom to understand that together God could use us as a powerful co-leading family. So our search began, and it has truly set us free.

Eventually, we both pursued doctorates of missiology and both studied more in depth about male/female relationships in both the home and the church. Through this series I want to share with you some highlights of things we discovered in our research by God’s Spirit. Thankfully, we found that we were not alone in our search and that many other evangelical believers were seeking Jesus and his perspective.

This brief post looks at a few truths found in Genesis 1-2 where we find life before the fall, before sin, before brokenness. In Genesis 1-2 we see God’s ideal family. Please note that these are brief statements, and we could expand on the first two chapters of Genesis for several hours (or pages). Here, I am simply giving a brief summary.

The writer of Genesis placed the word k’neged in front of the word ezer, meaning “corresponding to, equal to, like a mirror, or beside.” The phrase, ezer k’neged, does not indicates a woman’s lesser or weaker status, but an equal one! The original listeners to these words immediately realized that the woman was a “strength equal” to the man in God’s ideal family.

When Chad and I realized that God’s original design placed man and woman together as equal strengths, we knew that God wanted us to be side-by-side, following God’s guidance to make a difference in the world, stewarding the world together.

Love, celebration, joy, unity, and harmony describe Genesis 1-2 as God created and then commissioned both male and female to serve as co-regents. Of course, chapter 3 came next and things changed, but what Chad and I grasped from Genesis 1-2 set us on a path seeking to allow God to create this “equal strength” relationship between us for the sake of stewarding the world. As we uncovered these theological truths, some of our tears dried and a new co-mission became clear.

Join me on Wednesday as I start a series on power and how power was given, then distorted, and later redeemed by Christ in the context of the male/female relationship.

Join the conversation: As a woman or as a man, how are you living out the strength God created you to be?