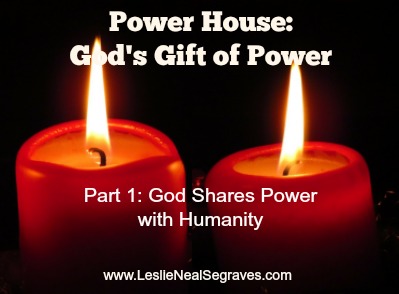 A jagged 1.5 inch circle imprinted her face – the scar revealing where Sima’s husband bit a chunk out of her face for preaching the Gospel. I sat with Sima as she recounted the story to me. She shyly beamed as she recounted how God came to her defense (another story, another time) and soon her husband humbled himself before God’s ultimate power. Together, Sima and her husband now preach, teach, and start churches in a persecuted context in Asia.

As stated on Monday in my blog Unleashing Equal Strength God originally created the man and woman as equal strengths. In this series on leadership, we will examine the concept of power as originally given by God, how the fall perverted power in the broken world, and how Jesus redeems the proper use of power.

As students of the Word, of course we must seek to understand the meaning of the biblical text and the author’s intent. Part of the difficulty of reading passages is that we often bring our own culture and 21st century ideas to the text. Therefore, I try to keep two words in mind as I study the Bible:

From our previous discussion, we looked at Genesis 1 and 2 and how the man and woman related. As I read the creation account, I do notice hierarchy a couple of times from the text – but not between the humans. A clear hierarchy exists between God and people and also between people and the earth. God is the Creator and people are the creation. People are given dominion over the earth in order to take care of it.

In relation to the man and woman, if I simply allow the text to speak for itself, I find only unified partnership between the man and the woman – not patriarchy, not hierarchy, not feminism, not machoism. “Bone of my bone, flesh of my flesh” (Gen. 2:23). God the Creator creates beautifully, and his creation responds and relates beautifully, joined as “one” with no fear, no shame, and no guilt.

In Genesis 1 and 2, between God and creation significant “power distance” exists. God is God in his essence, and the people are not God in their essence. (In my doctoral research, I studied Geert Hofstede’s index of power distance. Hofstede’s grid does not measure power distribution but rather how people perceive power. Though I find his research helpful, I do not agree with all of his conclusions and I express some reasons in my dissertation. If interested, click here.) Because God is God, high power distance in essence exists between God and His creation.

One of the first gifts God gives both the male and the female is power. God, the ultimate leader, commissions both male and female to share dominion over the earth, to steward the earth on behalf of God. In so doing, God gives some power away, lessening the power distance between God and humanity.  Obviously God holds ultimate power. He shares some power, but we should never believe we are close to equal to God simply because He gives us some power!  God intentionally lowers the power distance by sharing some of his power, enabling an amazing relationship between God and humanity as they partner together on the earth.

Some argue that God gives more power to the man in Genesis 1-2. They perceive a power distance between the male and female before the Fall. However, as I have read, prayed over, studied, and asked God to give me wisdom over these passages, I can find nothing in these forty-nine verses that distinguishes between the power God gives the man or the woman. (Remember exegesis vs. eisogesis).

The author’s intent of the Creation story does not seem to be who has more power or more authority – man or woman.  Rather, the author’s intent of Genesis 1 seems to highlight the ascending order of creation leading to the crowning of creation – humanity. The Genesis 2 narrative focuses on God’s provision to end human solitude. But in both Genesis 1-2, God demonstrated his intentions that the male and female live in a community that reflects the Trinity, the image of God.

Before traveling to China to pick up our new daughter, I gave each of my other kids a commission (ages 7 and 5). “We need pajamas for Phoebe, and I want you to each pick a pair out for her that you think she would like. Pick pajamas for her that you believe will make her feel warm, happy, and loved.” At that moment, I “gave some of my power away” and “empowered” my children to participate. I could have chosen the pajamas for my new daughter, some that I particularly liked. But I determined in my heart to allow them to choose and to agree to their choice.

With excited faces, they began their work to choose and provide for their sister. Their faces glowed as they examined pajamas and took ownership of serving their sister. I watched them and delighted in them as they participated with energy, thoughtfulness, and joy.

In Genesis 1-2, God issues power to both the man and woman to rule over God’s creation.  Holding, exercising, sharing and giving power away demonstrate characteristics of the imago Dei – the image of God. When we use power rightly for God’s glory, I believe our faces glow. And yes, I believe God delights as he watches.

Leadership is about influence. When God commissioned the man and woman to fill and subdue the earth, he in essence commissioned them to create culture, to influence the direction of culture. God still wants his followers, both male and female, to fill the earth by demonstrating his kingdom ethics everywhere.

Throughout the world, sisters in Christ like Sima, are rising up to use the power God gives them to plant churches, though they may bear scars. Some are paying a high price to live out their God-given power to influence and cultivate the earth for God’s glory.

Join the Conversation: As a woman or as a man, how are you using power to steward the earth? Do you tend to give power away, protect it, or snatch it from others?