Set Free by the LORD who Loves 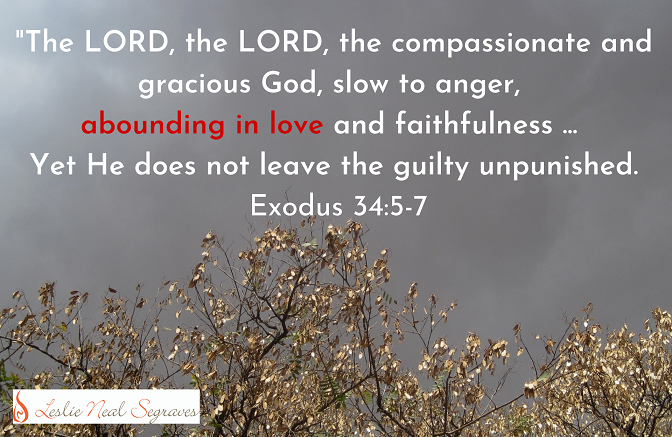 Today I meditated on Exodus 34:5-6. “Then the LORD came down in the cloud and stood there with him and proclaimed his name, the LORD. And he passed in front of Moses, proclaiming, ‘The LORD, the LORD, the compassionate and gracious God, slow to anger, abounding in love and faithfulness, and forgiving wickedness, rebellion and sin. Yet he does not leave the guilty unpunished.”

The Context of the Passage
In Exodus 34 God tells Moses to meet him again on the mountain with two tablets so God can write on them again. Remember, Moses shattered the first set. The stone tablets carried the 10 Commandments – four commands that teach us how to love God and six commandments that teach us how to love others. The Bible says the LORD comes down in the cloud and meets with Moses. While in God’s presence, God reveals some powerful words about His own identity and character.

God’s Name and Character
When God goes to Moses, He doesn’t start with, “Hey buddy! How are you doing? Things didn’t go so well with that first set of tablets huh? Ah, that doesn’t matter. No guilt, no shame, no fear! No problemo! Let’s just make some more!”

Rather, God proclaims His own Name. “Hey Moses. Let’s start here. I am the LORD, the LORD.”

That’s like me saying, “Hi Melissa. I am Leslie, Leslie.” God reemphasized His Name. That repeat means something. I know it made me pause as I was digesting the passage. I mean, let’s admit it. Most of us want to get to the fun part – the part about how loving and patient God is. But God says His Name two times.

Have you ever wondered why LORD is sometimes all in caps in your Bible? Well there’s a reason! When you see LORD in all caps, it is a word that refers to Yahweh – the most sacred name of the Lord. Yahweh means that God just is. He is eternal. The great “I AM.” To the Jewish people, the Name Yahweh was so sacred, they refused to even pronounce it. When the translators use LORD, it means Yahweh was the word used in the Hebrew. (If you see Lord, that means the original Hebrew was Adonai).

Notice that in this passage, the LORD (Yahweh) comes down to be with Moses. God’s humility moves him to go down among humanity. Yet, God conceals himself in the cloud to show His otherness. He proclaims His Name – LORD. He proclaims His self-existence and sufficiency with his “I am who I am – Yahweh!” God knows His identity. He is LORD. And the Creator of the universe has chosen to meet with man.

God declares His Name and then describes His character. He describes himself as compassionate, gracious, slow to anger, abounding in love, faithful, and forgiving of wickedness/rebellion/sin. The LORD, the One who IS, the great I AM bestows goodwill on his creation because of who GOD is.

But God continues to tell Moses that He does not allow guilt to go unpunished. Guilt for what? Sin! What is sin? Anything that misses God’s mark of holy perfection. Though the US church and Progressive Christianity either minimizes the effect of sin or redefines it (saying it doesn’t matter), these ideas don’t come from the Bible. God is LORD. The great I AM created the world, defines the world, established the world, and only He has the right to dictate the way the world and salvation work. It is because of His amazing compassion, graciousness, willingness to be slow to anger, abounding love, faithfulness and forgiveness the LORD later provided the way for there to be salvation from our guilt – His Crucifixion and Resurrection.

Accepting God’s love and surrendering to God’s Lordship
Today I pondered that I am a recipient of God’s abounding love because He as LORD chose a path for salvation that cost the life of the Savior and LORD Jesus. I deserve to be guilty forever. But I AM. So I am redeemed.

As tears trickle down my face, I in humility want to lay my life down to the LORD as He gave HIs life for me. Pledging to Jesus as LORD takes nothing away from me. In reality, I continue to realize that when I allow Jesus to be LORD, I run free.

Redeemed daughter or son, enter into the presence of  “The LORD, the LORD”. Rest in God’s abounding love. As a daughter or son, go tell the news that you met a Savior who rescued you from your sin and set you free!