Sanctity of Life: Do We Act Like Early Romans or Early Christians? 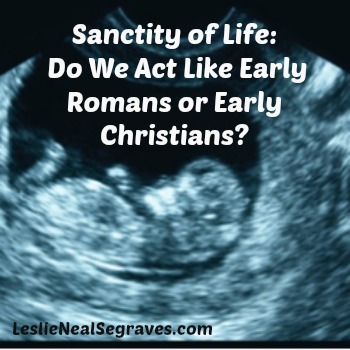 This Sunday, January 17, Christians will celebrate Sanctity of Life.

Well, some will. Will you be one of those who advocate for life in 2016 – not just with your words, but with your actions? Let’s take a quick journey into Christian history to discover how the early church dealt with the unborn, and consider what they might think about our current situation (with 330,000 abortions provided annually by just one well-funded U.S. group – and our and your taxes help support that group.)

During the first four centuries of Christianity, Rome ruled. For entertainment in the Roman culture, people attended gruesome “sporting” events; they watched humans torn to pieces by lions; they cheered the blood baths (Learn more). Immorality and perversion were rampant. Infanticide occurred regularly, and baby girls were often left to die by exposure. Abortion took the lives of the unborn and many women (Learn more). Marriage violence was common (Learn more).

Romans Won to Christ by the Persecuted Minority.

Yet into this bleak and violent culture, over the years, the Church won many Romans to Christ. What would attract the dominant Roman culture to a minority ethnically-based sect, monotheism rather than a pantheon, and morality rather than hedonism? How would an oppressed, poverty stricken minority win over the elite majority?

How did an oppressed people work holistic hope through all of society? Rodney Stark, a Baylor University professor wrote a book called The Rise of Christianity. He highlighted several reasons the Roman world was attracted to the Christian faith. Some of his conclusions include:

History Can Teach Us Now.

I find this history intriguing as a powerful counter-cultural example. During a difficult, poor, and persecuted time of church history, Christians promoted life and health for the discarded. Their concern eventually spoke volumes to the Romans. How? What convinced the Romans? It appears to be the consistent lifestyles of Christians who followed Christ even when and even if it went staunchly against the cultural norms. Christians offered something new, something that sprang from a deep love, and something that resulted in a transformed life. It was the Christians’ transformation, rather than their conformity to common cultural practices, that won over the Romans. They chose transformation, rather than conformity, even if it meant personal danger or ridicule.

Fast-forward two millennia. Today, certainly some people speak up and take action, but sadly there often appears a sad blending of beliefs between Christians and non-Christians and a silent resignation to inactivity by many. The issue of abortion may be considered too controversial, too hot a topic, or requiring too much energy. I have heard some Christians state, “Well, I am pro-life, but abortion is legal so there’s nothing I can do.” I ask you, how does that statement accomplish anything? How does it distinguish a Christian from a non-Christian? It doesn’t.

Blending with the culture…that’s certainly not what the early church taught or lived. They did something about the sinful plight surrounding them, even if it meant their own blood ran down the streets of Rome. They loved, they grieved, they mourned, they prayed, they rescued, they brought in, they protected, and they changed their culture!

Recently I had a public conversation on this issue. (The other woman yelled, “I’m just about to blow up!…I’m trying hard not to bite my tongue off…”). This “blow-up” occurred not in a pagan place; it took place in a church. She proceeded to tell me,

“The Bible gives no concrete standards. God simply loves.” She continued, “That is why Christians think differently about some issues for example, like on abortion. There’s not one way. There are different interpretations.”

I have grieved this conversation for days because I think her sentiment echoes across the plains, mountains and cities of our nation. This echo results in the silence and inaction of followers of Christ. This inactivity, lack of concern, or the blending into our culture through conformity causes the Church to lose its prophetic voice that will transform our society.

Her “near explosion” at me or our fear of such verbal explosions may intend to silence me and others or ridicule me and others as if we were the intolerant, unloving Christians. If there is no standard, then who I am to speak against something or anything? If God simply accepts people without moving them toward repentance and cessation of sin (or even defining “sin”), then I should not get worked up or take action on really any matter. I should be quiet and just let things happen. But I fully disagree because I want to be a follower of Christ who lives as salt and light in the world and thus somehow to be used like the early Christians.

God’s Mission is to Transform Humanity.

The more I read Scripture (and study church movements that highly impacted surrounding culture) the more I know that conformity to culture, passive silence and paralyzed inaction is not the “interpretation” of Jesus, the Most High God and Author of Life.

The Old Testament prophet Ezekiel proclaimed that God’s people had begun to look exactly like the surrounding culture. By simply reflecting the world rather than reflecting God, His people had profaned His name among the nations (Eze. 36:20-23). The Bible spells out that anything that violates God’s character is “sin” and caused the willing death of Jesus Christ. His excruciating death was not so that any of us can just continue to live as we please. His death frees us from the bondage of death – for eternity and for abundance now. His intense love can free us from the slavery of our culture-bound thoughts and actions.

I as a follower must reflect God’s character in my life through my voice, my votes, and my actions. No interpretation is left to me (if I am transformed) that can promote the death and torture of the smallest of humans (please watch the Planned Parenthood videos – don’t turn your face. Watch and grieve and act for justice).

Entitlement Makes us Believe We Deserve the Final Word.

In our entitlement culture, we as Christians at times slip into this entitlement mindset. “We all deserve our own interpretation of Scripture.” If we bring entitlement into our Scriptural study, we have lost a healthy fear of God. The Scripture works (or is supposed to work) as a sword in our spirits to transform us into the reflection of God. We as Christians have no right to lightly read the Scriptures and then claim that God condones our opinions “because His job is to love.” His love drove him to a cross so that we, His image-bearers, could be transformed for His glory. As we read the Bible, we are to realize we should at times come out bleeding, so that we repent and ask to be changed – for God’s glory! God should get the final word – every time.

Do You and I Look More Like the Early Romans or the Early Christians in our Response to Life?

So do your beliefs as a Christian mimic more the worldview of the Romans who had little value for life? Or do you look more like the early church who loved Jesus enough to live out their faith – help the orphan, speak up and defend the rights of the unborn, advocate for the well-being of women (since abortion hurts the overall health of females), serve the widow, and take care of the exploited and vulnerable?

My prayer for the Church and for believers around the U.S. is that we would truly allow God to change us so that we can change our nation and the world. Of course, the hope for the U.S. is not in any political system. The hope is that God’s people would allow God to transform them. It starts with God’s people (2 Chron. 7:14):

This Sunday, January 17, make sure you speak up for the voiceless. But don’t stop there. Speak up every day of 2016 for the unborn. Give sacrificially to help women keep their babies or help families adopt. Bring a foster child into your home. As a Christian, vote! Don’t vote by your pocketbook or by your political ideology (or by a person’s race or gender). Don’t vote by what you can get from a political party or what’s comfortable to stand for in your own community. As much as possible, vote in ways that stand for life.

And I believe He stands for those who care enough about life to stand on His side.