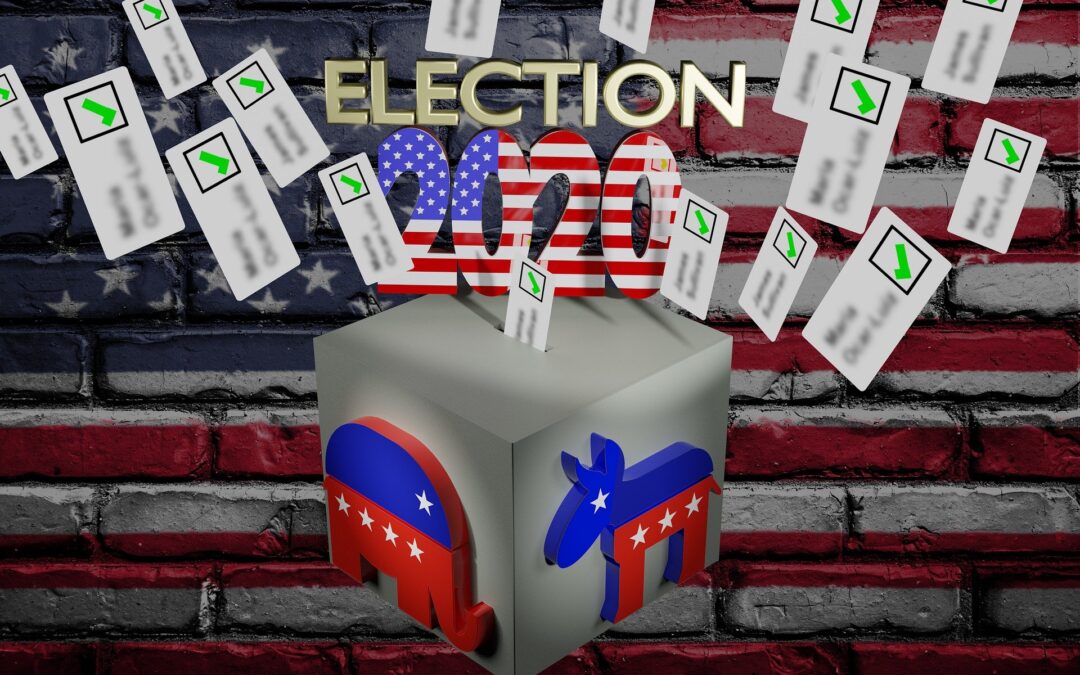 This simple blogpost seeks to share our concerns about John Piper’s recent article Policies, Persons, and Paths to Ruin which describes his 2020 election thoughts. We want to share why we believe some of his conclusions could lead to devastating consequences.

At the outset, we want it to be known that we agree with much of Piper’s article (the need for holy leaders, Jesus as the only pathway to forgiveness and salvation, love of the Bible, the need for Christians to prepare for suffering, imperative for Christian leaders to prepare strong disciples, the evils of the abortion industry, etc.) We respect John Piper as a Christian brother, and while we disagree with him on other theological issues, we will focus now on areas where we differ regarding his recent article.

Sadly, we think some people liked his blog because it gave them justification to vote for the most pro-abortion duo the U.S. has ever seen by linking “death by arrogance and death by abortion” as equal in outcome. We believe Piper overstates his position.

Let’s just cut to the chase.
Would you prefer that your spouse speak crassly to your children, or dismember them?

Without repentance, sins of boastfulness and sins of abortion both bring eternal consequences. Both are wrong, but one results in an immediate and brutal conclusion.

Quick Summary Points
⦁ We are not voting for America’s pastor. For president, do you prefer Person A (their sin + their policies) or Person B (their sin + their policies)? Jesus is not on the ballot.
⦁ The U.S. is not a theocracy like the Old Testament, nor do we have kings that rule for 40 years like in the Old Testament.
⦁ Our nation’s decay did not begin 4 years ago. Much of our American decay can be rooted in failure of the Church to disciple people toward Christlikeness.
⦁ Yes, all sin leads to death, but pride does not equal abortion in its immediate impact. Sin’s consequences on earth are not equal. Boasting is wrong, and can be seen by both parties.
⦁ Make your vote count and take action!

Not Electing a Pastor
When citizens vote, we are not choosing the pastor of America. We vote primarily based on the platform and plans of the candidate. Character matters, but not all elections have people with impeccable character. No political party owns all the right answers, but we should understand their trajectory and goals. We hold strongly to the biblical theology that the government has a job to protect and govern, and the Church has a job to extend, proclaim, and live out the Kingdom of God. Sometimes those jobs intersect and sometimes they don’t.

When we consider the stated platforms of both the Republican and the Democratic parties, the choice stands as a stark contrast. If you are interested enough to read this article, you probably understand the vast differences on: foreign policy, religious freedom, education, energy, Supreme Court picks, economy, climate, regulations, border security, military, law enforcement, healthcare, and pre-born right to life/abortion, etc. The two platforms this year provide about as polarized an option as we could imagine.

Which platform better lines up to your belief system?

Honestly, we are not needing or wanting a sermon from our president. Our faith and convictions neither falter nor increase based on the White House. Instead, we look at the actions of the candidates – what bills they sign into law, what executive orders they pass, who they select as judges, how they respect and defend religious liberty, how they negotiate with other nations, how they treat the vulnerable pre-born, and do they have a history of success and good decisions.

We do find it interesting that the entire media industry fawned over Donald Trump when he was a businessman. Few in the media criticized his faults, his arrogance, or his flamboyance. Instead, rappers praised him in their lyrics. And media networks promoted his brand as desirable… until he announced his candidacy as a Republican. Trump does not talk like a politician, nor is he America’s pastor.

Piper basically described Trump’s last five years as “not only self-incriminating; they are nation-corrupting.” Wait… in just 4 years Trump has corrupted our nation? No, the corruption and decay in America was happening long before Trump was elected. Immoral laws were passed by Congress, unimagined rights were created by the Supreme Court, the White House was lit up in rainbow colors, and anti-Christian bias has abounded in media and entertainment for decades. Many who call themselves Christians look like the world. We would appeal rather to the Church, to our sisters and brothers, 2 Chronicles 7:14 “If MY people…” The healing for our land will come from God when His people repent – not from the President or any political party.

Our nation has been journeying down the path of corruption long before Trump came on the scene.
Can you think of other leaders, decision-makers, influencers who have impacted America negatively?
We can.

False Dichotomy
From the beginning, Piper’s article blurred the lines between candidates and platforms. Piper incorrectly compares Trump’s apparent personal sins to the Democratic platform. In our opinion, this comparison is not an accurate equation.

Consider Piper’s words toward one candidate: “Unrepentant immoral, unrepentant boastful, unrepentant vulgar, unrepentant factious.” Is Piper referring this sentence only towards Trump? We are aware of accusations about both candidates for each of the above sins. Certainly both parties contain people who are factious and vulgar. Does Piper believe that Trump has single-handedly unleashed these sins into America, like a Pandora’s Box? Are these actions Trump’s personal “platform,” with an aim to increase these sins? Of course not.

Consider Piper’s words toward one party platform:  “Policies that endorse baby-killing, sex-switching, freedom-limiting, and socialistic overreach.” This seems to be Piper’s summary of the Democratic platform. Political parties intentionally plan to spread their platforms across the nation, believing it strategically advances their agenda.

Additionally, Piper repeats the word “unrepentant.” But we are not aware (nor is Piper) whether or not either candidate remains “unrepentant” to the people they hurt personally. Piper’s words seem presumptive. (Is Piper saying that Trump should repent to America for immorality? Should Biden? Is Piper implying that Biden should repent for using the vulgar f-word when Obamacare was signed into law?)

Trump’s/Biden’s personal sin vs. party platform is not an accurate equation. A more accurate comparison would be to contrast Trump’s character with Biden’s character, for good or for bad. What has each person accomplished in their lives? Again, the correct comparison is Person vs. Person, and Platform vs. Platform.

Piper mentions a few times that he is “baffled” and “bewildered” that Christians are “sure that greater damage will be done by bad judges, bad laws, and bad policies than is being done by the culture-infecting spread of the gangrene of sinful self-exaltation, and boasting, and strife-stirring.”

A president like Donald Trump may display brash arrogance, and his tweets may enrage people. We personally do not talk this way, nor do we like it. (Nor do we like the way Nancy Pelosi and Chuck Schumer talk). But by Trump endorsing the Mexico City Policy, thousands of babies’ lives have been saved in many nations (we have data). By placing three originalist Supreme Court justices and scores of federal judges, he has affected millions of lives for decades to come. By moving the U.S. embassy to Jerusalem, we see his strong and friendly heart to our Middle Eastern ally. There have been no new wars, ISIS has been crushed, and peace treaties have been signed.

Piper indicated that a leader’s sins, “destroy persons. And through persons, they destroy nations.” We believe Piper’s foundational assumption goes too far in equating the consequences between abortion and pride.

While each of the first actions are sinful and distasteful, the second actions carry far greater and devastating consequences. All sins are NOT equal in impact. This is where we think Piper makes the biggest blunder in his article. Trump’s personal arrogance is not causing the direct deaths of persons. Abortion does (over 2,300 in America every day).

Should it please a Christian if a candidate spoke smoothly and with a gentle demeanor, but opened wide the door for abortion, increased Planned Parenthood’s budget, and received the Margaret Sanger Award? Should smooth and humble speech make Christians more pleased? A pleasant demeanor does not make up for destructive policy. Actually, smooth demeanor can cover-up a deceptive heart. We should practice discernment at all angles.

Conclusion and Action
We believe that Piper’s perspective basically offered Christians a justification to consider the sinful parts of Trump’s persona as weightier than Biden’s sin and his direct pro-abortion policies.

So, would we prefer that our president speak with humility at times? Sure. Are we thankful for the strong list of accomplishments that have occurred to defend babies domestically and worldwide? Absolutely.

But what can we do?
1. Start a prayer group – We have been praying for hours each week for the past 4 months with a group that meets in our home. Keep it simple, and get it started.
2. Gather as a church – Prolonged, intentional, intercessory prayer is needed in our nation (2 Chronicles 7:14).
3. Research Saul Alinsky’s dedication to Lucifer in Rules for Radicals, and notice Alinsky’s famous students. Pray.
4. Research Karl Marx’s foundational satanic beliefs and his hatred of people. Pray.
5. Don’t allow theory and big words to make you dull and deaf to the cries of our nations’ daughters and sons whose lives hang in the balance.
6. Get involved – Fostering, adoption, give generously, start post-abortion support groups in your church, help at-risk women, teach parenting seminars, and so much more.
7. Vote – And don’t waste your vote on a write-in.

You get the point – please pray and get involved during and after the election!