My Dream: That My Girls and My Boy Be Both Beautiful and Strong 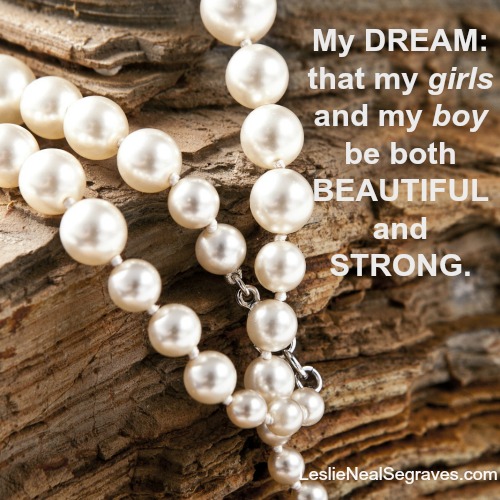 Eden immediately began to pout, “No, no, no! That’s not the way the song goes! It’s not how my teacher sings it! It’s the strong little boys and the beautiful little girls! That’s the right way!”

Whoa, whoa, whoa. Time for mama to enter and correct some theology and ideology!

But before I could speak, Joeli said, “No! I want to be strong too! It’s important for me to be strong! So yes, this is the right way to sing!”

Gotta admit, my heart was singing, “You go girl!”

Mommy: Eden, do we want Joeli and Phoebe to make good decisions? Will their external beauty help them make the right decision or help them follow Jesus even if it’s really hard?

Mommy: Will your strong muscles help you make right decisions or help you follow Jesus even if you’re hurt for following Him someday?

Mommy: Right. See Eden, it’s not strong muscles or pretty faces that make any of us capable of following Jesus in our nation or world. It’s beauty and strength that comes from a heart that trusts and commits to follow Jesus even when it’s hard.

Eden: But my teacher taught me to sing it this way.

Mommy: Sweetheart I know.  Even at church, even among Christians, some people emphasize that women are simply to be beautiful and sweet.  Boys are supposed to be strong and tough. But think about Jesus. Was Jesus tough? Was He sweet? Was he strong? Would you describe His heart as beautiful? If so, then that’s how we are supposed to be – beautiful and strong – from the heart. Though I truly believe your sisters are beautiful and you are handsome and I truly believe your sisters and you are so strong with your muscles, that’s not my greatest dream. I dream that my girls and boy be like Jesus – who is beautiful, sweet, strong, and tough.

For  my dream to be fulfilled, I have thought of five areas that I believe are critical to be both beautiful and strong. There are obviously more, but I list five here!

So what is my dream? That my girls and my boy would be both beautiful and strong.

Mommy: So kids who is supposed to be beautiful?

Mommy: So kids who is supposed to be strong?

Another day of parenting…. Wow, this is hard…