How Exploitation, Alinsky, and the Vulnerable Impact the Coming Election 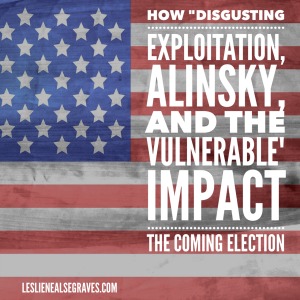 (Chad and Leslie both contributed to this post. It reflects our joint perspective on Leslie’s personal blog.)

We are troubled with the soul of our nation. What in the world do these three themes (exploitation, Alinsky, and the vulnerable) have to do with one another? Hang with us on this blog, and you will see how we believe they are tied sadly together.

As I (Leslie) reflected on how to use my voice on Facebook this political season, I chose to limit my commentary and only speak on behalf of those who had no voice – the unborn. Why? Because Christianity hinges on the hope of the Resurrection, or Life in other words (blog post to come soon about this).

So we intentionally chose to limit political commentary to an actual life and death issue. For those of you who want to say we shouldn’t vote based on one primary cause, we don’t. There are numerous reasons we will not vote for the current Democratic presidential nominee or support the Democratic platform. We will not lay out the multiple reasons here, but we have done our research and thought through at least twelve issues. Please note, we voted for neither Hillary nor Trump in the primaries. And for those who might be tempted to think that we are simply “pro-birth” but not wholly “pro-life,” our lives have been deeply impacted by Christ and his intentional, holistic service to people. We seek to follow His ways.

People have asked us what we think about the sexual exploitation tape of Trump. People have wanted to know why we have not referred to it, knowing of our work among exploited women. We want to give a brief response, but ONLY because it relates directly to our personal “speak up for the most vulnerable” strategy.

Why have we not commented on the Trump tapes, and why would the tapes not cause us to vote for the Democratic platform/candidate? Three primary reasons: 1. Mutual disgust 2. Saul Alinsky’s strategy, and 3. Deep concern (and fight) for the most vulnerable.

We are strongly against all forms of sexual exploitation and all forms of sexual sin. We hold biblical convictions about what is right and honorable and what is wrong and shameful though it may differ dramatically from many in our culture. We work hard to stop the exploitation of trafficked women. We work hard to help little girls who have been exploited. We choose forms of entertainment (movies, media, and books) that do not celebrate sexual sin. We give money to help victims. We try to help those exploited from a holistic perspective. Our convictions affect both our work and our personal lives. We believe that integrity requires consistency both publically and privately.

But, if we genuinely oppose exploitation, then we cannot simply pounce on it from one angle in this election cycle. If we are genuinely against sexual exploitation and believe we need to speak on behalf of women, then we must not only bring up the Republican nominee’s tape and the allegations, but we must also bring up the sexual exploitations and cover-ups of the previous Democratic president and the current Democratic candidate. We won’t list all of that here. The facts are out there for all to see. One thing is certain however. Proper denouncing must denounce both candidates in this arena, not only one.

So, certainly we denounce Trump’s recorded comments and any immorality. And we also denounce the sexual exploitation and subsequent threats by the Clintons. For us, this particular issue ends in a mutually disgusting tie between the two. In the reflection of that sewage and in support of females, we denounce them all.

This reference to Alinsky may seem like a strange rationale. Nevertheless, here it is. Saul Alinsky was a Marxist, a community organizer, and he wrote Rules for Radicals. We have both read this and have been amazed how the ideology has been imposed through President Obama and continues through Hillary Clinton. She was a personal friend of Alinsky and he once offered her a job. At the beginning of his book, he acknowledged Lucifer as “the very first radical” who “at least won his own kingdom.”

Because we recognize how worldview affects our actions, we are deeply interested in people’s worldviews and how they impact their decisions and policies.

We just want to bring up one issue in his book Rules for Radicals that we believe was played out perfectly:

“Pick the target, freeze it, personalize it, and polarize it.” Cut off the support network and isolate the target from sympathy. Go after people and not institutions; people hurt faster than institutions.

Do you see how the media, the Democratic Party, the Republican Party, and many Christians have fallen perfectly into this trap? They isolated Trump and tried to bring him to a place of no sympathy, and so many have jumped on that bandwagon while ignoring similar exploitations by the Clintons.

Ephesians 4:17-18 challenges us. These verses encourage us to “no longer live as the Gentiles do, in the futility of their thinking. They are darkened in their understanding and separated from the life of God because of the ignorance that is in them due to the hardening of their hearts.”

We are personally terrified to be deceived and in turn deceive others. It is possible for a hardened heart to sear the conscience – even among Christians. It is possible to have a relationship with Christ but to lead others astray in an area. When we saw what was happening through media, both parties and Christians; we immediately remembered this verse and thought of Alinsky’s strategy. Thankfully, red flags popped up, and in this instance at least, we have tried to avoid the deception of those following Alinsky’s strategy. So for us, we did not hyper-focus and polarize one candidate for sinful words/actions (that they shared) and thus fall into Alinksy’s strategy.

Our Fight for the Most Vulnerable

Our third reason that we didn’t jump into the fray is that for us the issue of life proves more weighty. Therefore, I (Leslie) didn’t jump in with, “Yeah, I’ve been touched wrongly!” We do not know if the Republican nominee will be able to change the trajectory of the abortion issue, but from what Hillary Clinton has stated, she wants to increase the scope, the access, and the prevalence of abortion, which Satan loves (seriously Satan LOVES abortion.)

Fine… be disgusted as we are about immorality, but realize that both sides are gross and move to the next issue, one that either protects the most vulnerable or kills them. As soon as we saw Christians enter the fray and denounce Trump (and ignore similar actions of the Clintons), I (Leslie) wept. I (Chad) did pull-ups in frustration. Why?

Because Christians who denounce only Trump’s sin and ignore the Clintons’ miss an opportunity. They neglect the chance to protect the most innocent of all.

Before 2012, the Democratic Party’s platform espoused that they wanted abortion to be rare. But in 2012 the word rare was removed and today the 2016 Democrat platform promotes Planned Parenthood and seeks to repeal the Hyde Amendment (see p. 37). Clinton has promised to promote abortion on demand at any time of the pregnancy, including partial-birth abortion. Additionally, she wants to propel tax dollars into the abortion industry’s hands by removing the Hyde Amendment. It’s no longer pro-choice. It’s pro-force.

We have read those blog posts saying that the world will be fine and okay on November 9 – and it’s true. Maybe our personal lives won’t change immediately. I think we will still have our jobs and our families. But you see, the numbers of deaths to the most vulnerable will certainly increase if Hillary has her way – burned skin, dismembered bodies, selected genders, celebrated shouting at their deaths. These lives and these deaths are at stake in this election and the forcing of Americans to pay for these procedures. (If these few graphic words of what happens during the abortion process turn our stomachs, how much more would grasping the reality of 3,500 abortions each day in the U.S. alone?)

Vote FOR the Vulnerable

We are disgusted on so many levels by the sin and pride, the lying and corruption of the political process. Yet, we cannot allow our dislike for the candidates to derail our vote for the vulnerable. See, we count ourselves among those who are primarily voting against a certain candidate/platform in the hope that the other candidate/platform will promote life or at least not increase the rate of death of the vulnerable both at home and abroad and violate the consciences of millions of Americans in the process. We are choosing not to waste our vote (third party), or neglect our vote (stay home), but we pray that our vote will honor those who gave us this privilege and promote the culture of life that Jesus loves.

Who Do You Love? The vulnerable unborn and the vulnerable women. We love these from a deep place, not in a politically correct way that pretends freedom but offers no transformation, no real hope. We love these in a way that provides a home, a counselor, life skills, and the Gospel of Jesus. We love these in a way that offers hope at the end of a tangled web of brokenness. We love and believe that dignity resides in the privilege of choosing life (no matter how difficult the circumstances) rather than death for their own child. Women, you are more!

May my own negative, unjust experiences as a woman never push me to turn a deaf ear to you – the vulnerable, the exploited, the abused, and the degraded.

May the fact that I am a man never stop me from standing up and speaking up for the tiniest of God’s image bearers, and may my personal actions and thoughts line up to God’s Word.

Help us hear your voice and your heart.

Help me walk after your intense holiness of character.

May we discern the spirits around me with your Holy Spirit to guide.

God, for all women hurt everywhere by exploitation, help us love deeply and help them heal.

Lord, for all the efforts of organizations that are fighting for exploited people, give them your grace and energy and the resources to carry on.

God, for all Christians who look at pornography, please bring conviction and help them notice it so they repent and change with your power.

Standing with the resurrected Lord and His culture of life that begins in the womb and continues throughout the life span.

To see how the early Church countered the Roman culture of death, check the post: Sanctity of Life: Do We Act Like Early Romans or Early Christians?