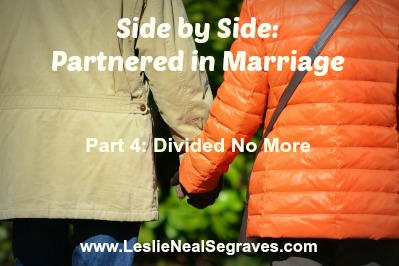 Chad and I sometimes talk about how it would be so much easier in our family (it seems) for him to exercise singular dominion, and for me to simply turn towards him in agreement. (Of course that could also be “the grass is greener…”) It is honestly hard to wage consistent battle against our fallen nature, for both of us to live out God’s calling and responsibility, and for both of us to hear and follow God’s leadership.

Yet, when Christ created a “new way”, he also empowers us to demonstrate, reflect and spread His way and His kingdom standards. Reflecting our own culture, or our fallen nature, is natural. Reflecting God’s culture requires supernatural strength.

The Apostle Paul recognized that Jesus’ crucifixion destroyed the dividing wall (Eph. 2:14-18) that existed between races, classes, and genders. In this way, Christ restored the possibility for believers to experience community based on God’s original design.

But now in Christ, Paul did not simply accept the tradition and the cultural norms. Through the power of the Holy Spirit, Paul acknowledged, challenged, and transformed his culture. In Galatians 3:27-28, Paul mentioned each phrase of the Baraka and then reframed it. Because of Christ… female, Gentiles, and slaves were suddenly equal with free, Jewish men!

With this revolutionary new prayer format, external features would no longer determine one’s value, because Paul proclaimed, at the foot of the cross all people are equal. The prophetic nature of the new creation did not allow one’s birth to determine one’s worth.

It is important to note that Paul does not deny that differences exist in social status. He seeks to communicate that while humans do not change in their created being, the relationship between humans could change.

One’s social status could no longer determine a person’s serving status. The cross and resurrection signify a new day, a new kingdom, and a whole new nation of priests. We are now “a kingdom of priests and a holy nation” (1 Pet. 2:9). Male and female priests, from all ages, races, and corners of the earth, must now stand in the gap between God and those yet to be redeemed. The Holy Spirit releases gifts into His people as the Spirit desires.

As I reflect on the power of the Cross, I remember how God created woman by taking a piece from the man’s side. While Jesus died on the cross, a sword pierced his side as the soldiers determined he was dead. As the spear pierced Jesus’ body, I wonder if God chose to symbolize that a new creation has been formed through this second Adam’s side? A second Adam, a second sleep, a second surgery, a second Bride, and soon a second awakening, and a second life. Hmm… it amazes me how Scripture is so intricately tied together.

The Bible makes it clear that Jesus’ broken body provides the pathway for a new creation. Does a new creation have a new way of life as well? Jesus’ resurrection and the Spirit’s indwelling provides the daily power to live out restored community in a broken world divided.

Join the Conversation: In what ways might your church culture have its own Baraka tradition – traditions that lessen the value of some people?